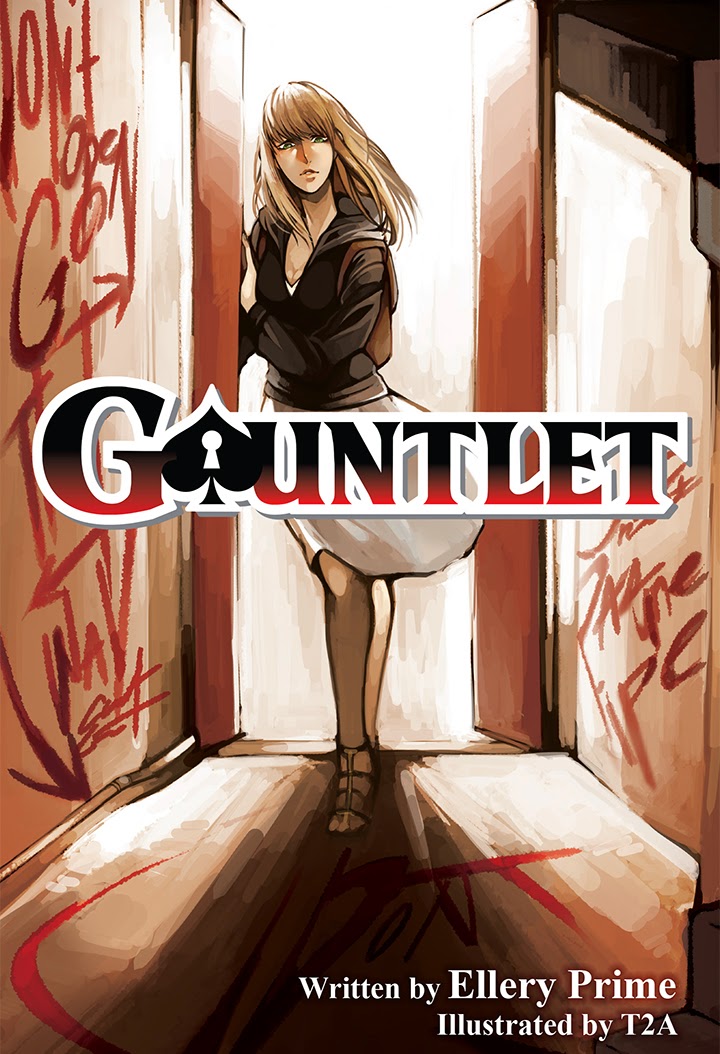 Happy to embrace her adult independence, Clio moves to the sprawling city of her dreams. The layered beauty of the metropolis lives up to her expectations…until one terrible night, when she discovers the dark world at its core. Clio is launched into a frightening labyrinth where everyone seems to be playing a different game.

This hidden inner city blurs the line between reality and illusion, concealing both dangers and rewards–and Clio’s forced journey is complicated by friendship, sexual awakening, and betrayal. Clio’s search for the secret inside the gauntlet’s heart will leave her questioning who she is and what she really wants.

I was fortunate to receive this light novel (similar to a serialized novella) from Sparkler Monthly in exchange for an honest review. No other compensation was given.

I actually really enjoyed this story. I couldn't stop reading once I got started. I'm glad I received this as a finished ebook because I know reading it chapter by chapter would have killed me in anticipation. Each chapter left us at a cliffhanger which I loved and hated it. Loved it because I needed to know more but hated it because if I were reading it by chapter I would hate to wait for the next chapter but I know it would be worth the wait. You know that's done with careful planning.

The pacing was good for the most part, although I did find myself skipping some of the more slow exploring parts. I was reading more carefully in the beginning but realized that not much of of the details were relevant to the rest of the story. However, whenever we got to the heart pounding scenes I found myself on the edge of my seat. I loved it when there was a revealing scene or a chasing scene because I read that as quick as possible and before I knew it, the scene was over.

I felt like this story knew how to intrigue a reader. The author artfully strung us along until the next heart stopping part of the story. This story, in my opinion, is definitely action driven. The main character does grow and learn but I don't know if she has changed enough for me to say it was character driven. The other characters are minor but they all helped the main character, which is fine. With the exception of a few characters, the others were not as significant to the story.

I do feel that the story was well written but I felt like it could have been made more of an impact. The intrigue and mystery was solid but there could have been more clues dropped in the story. I don't think there was enough to allow the reader to figure out what was going on in the Gauntlet because most of the time I felt clueless and confused.

The characters were moving along and doing stuff but I had no idea why or for what reason. Maybe I didn't get the connections, and that's ok, perhaps it was planned that way so that the story was unpredictable and it sure was that way for me. Still, as a reader I was slightly frustrated that even now as I sit back and think about the story, I still didn't have many clues that could have led me to the conclusion at the end. There weren't enough hints as to what was going on until the big reveal at end. Then I realized the earlier half wasn't even entirely relevant to the story at the end. That felt like a waste of time and story to me because the earlier minor characters pretty much disappeared after that first half of the story.

Now, the ending was good, I liked how the climax of the story was written because it was clever. Not that it's my story to tell, but I could think of a different way for it to solve at the climax so that almost everyone was happy. There are a few loose ends that I wish were tied up, such as the relationships with a few of the protagonist's friends. Also more of an explanation of how Gauntlet was created and the roles of it would have been nice to understand. The story touches upon it a little but mostly leaves it to the imagination of the readers. I like the meaning behind it  the story, and without spoiling you, it does make you think. I think I've only read one other book that challenged this way of thinking for me. It was done decently but I just wish there were more hints about it because it would have made a better revelation in my opinion.

This story is fascinating and well written. It intrigues you until the end, so if you enjoy games, mysteries, and stories that follows a character's journey, then you'll want to read this book!

I actually also got to review a Cherry Bomb short story which is an exclusive story for mature audiences (18+), in this case, due to the sexual themes.

This story was set in Gauntlet, it revealed the alternate life of Clio if she did not make the life altering decision that she did in the Gauntlet. It shows a little more behind the scenes of Gauntlet and the roles the people played as well as the world she now lives in and the role she now plays. I loved that we got to see how each person plays their roles but I still don't quite get how they are forced to perform the roles or what the rules are for Gauntlet. Still it's interesting to see from a different perspective.

I enjoyed the little glimpses or parallels that the short story made to the book. I liked the love scenes and ended up laughing at the end when it revealed what really happened. I don't want to spoil it but I did find it immensely entertaining. I think if you like Gauntlet then you'll love the short story that goes along with it.


Now as a disclaimer, I got to review these stories in exchange for honest reviews. I've known Sparkler existed for awhile but haven't quite had the interest in learning more about it until now. It has recently come to my knowledge that Sparkler is searching for new memberships to help them keep going so that they can continue doing what they love doing. Making and sharing quality stories.

They are currently doing a Membership Drive so unless they get 2,000 memberships by the end of Year 2, there will be no Year 3 for them. So check them out if you never heard of them! There's even a Year 1 sampler download for free!

So help them get the numbers they need! Don't worry, I don't get a commission for sharing this information. I just wanted to help support a company sharing stories that I like which is why I made the plunge and bought a year membership. ^_~