Cover Reveal: If the Broom Fits by Sarah Sutton 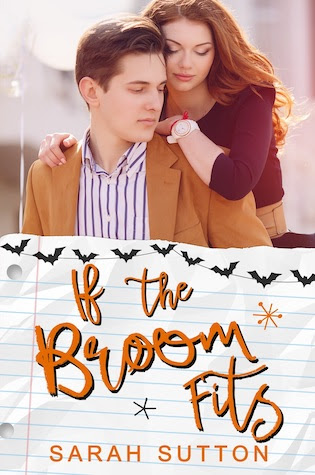 Blaire has a bad attitude. At least that’s what everyone tells her. It could be because it’s days before Halloween, literally the worst holiday on the entire planet. And it doesn’t help that her super-hot ex-boyfriend, Lucas, is determined to convince her otherwise by making her take part in “festive activities.” Apparently carving pumpkins is going to magically change her mind about the holiday? Yeah, right.

But Blaire has never told anyone the truth of why she hates Halloween, or the truth about her and Lucas’s break up. Being around him is so much harder than she thought, especially when it looks like he’s starting to move on.

And when she gets a letter in the mail from someone who broke her heart, can Blaire overcome the negativity threatening to drown her? Or will her bitterness and secrets push everyone she loves away? 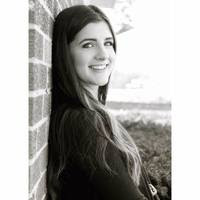 Sarah Sutton is a YA Romance author, bringing you stories about teenagers falling in love (sometimes with magic). She spends her days dreaming up ideas with her two adorable puppies by her side being cheerleaders (and mega distractions). 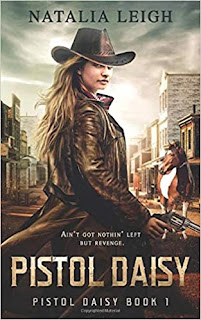 When Daisy Allen’s family is brutally murdered by the infamous Hopkins gang, she’s left with two options: drown in a bottle of whiskey and grief, or saddle up and hunt the killers down. Accompanied by strangers in pursuit of the same outlaws, Daisy takes to the Colorado plains with an old revolver and a hunger for revenge. But the Hopkins gang isn’t easily found, and as their pockets run dry and the trail goes cold, Daisy and her companions may be at the end of the road. She must learn how to survive in this dangerous world of outlaws and gunslingers, or her only chance at avenging her family may be lost.

Don’t miss Whiskey City, the next book in Daisy’s cutthroat quest for revenge.

This is the first book I've ready by Natalia Leigh. I enjoyed it so much that I picked up "Song of the Dryad" since that's more up my alley as I prefer fantasy books.

I don't normally read Westerns, typically because most books are not written for or by women. I've read a few Westerns written by women and have been pleasantly surprised at how much I like them. Also, I don't feel like the time period was particularly kind to people of color. The author seemed true to the time period but I feel like she took some creative liberties which I welcomed.

I found myself easily slipping into Daisy's world and I even enjoyed the Cowboy accents within the dialogue. It felt authentic although I've not lived in that era.

I flew through the book and I liked Daisy overall as the protagonist. Her reaction to her family's murder more than believable. I enjoyed the different characters in the group but I did find myself losing track of who was initially introduced and how many people were in their little group. I sorted it out later but I did get a bit confused with that. I also wanted to know more about them and how they all met or got together.

I feel like there were several moments of waiting for information to come or things to happen. It didn't usually last long but I did find myself skimming to get to the juicier parts. I kind of forgot who the 'baddie' was too because we didn't really see him except in the beginning.

I enjoyed the end but perhaps it's just me but I wanted a bigger pay off at the end. However, I still liked how the author ended the book. It does make you want to know what happens next! I recommend this if you're looking into diving into a woman driven Western story.

I also would like to point out some triggers: sexual assault and harassment, then some prostitution. I'd consider this a upper YA book and you might want to consider this if you're sharing this with younger readers.

(An ARC was provided in exchange for an honest review. I was not compensated in any other way.)
Posted by Aisazia at 7:34 PM No comments:

Book Review: Out Of My League by Sarah Sutton + Giveaway 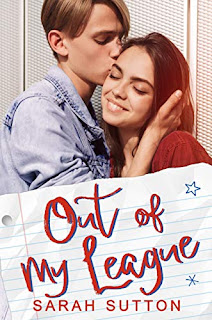 Out Of My League by Sarah Sutton


It’s all fun and games until someone catches feelings.

Sophia Wallace is convinced her life is over when her high school cuts the journalism program. Without the elective, she loses her chance to intern with the biggest newspaper company in the county, and why? All because the baseball team needs more funding.

To make matters worse, her boyfriend publicly dumps her at a party, which is mortifying. But the icing on the cake is when the captain of the baseball team and the most popular guy at Bayview High, Walsh Hunter, decides to be chivalrous. He jumps in, throws his arm around Sophia, and declares his undying love for her. In front of everyone.

Suddenly, Sophia is thrown into a world of fake relationships and undercover journalism, and she realizes she’s way, way out of her league.

Good thing she’s got the team captain to teach her how to play.

But faced with choosing between saving her journalism class or her newfound feelings for Walsh, will she strike out or hit a home run? 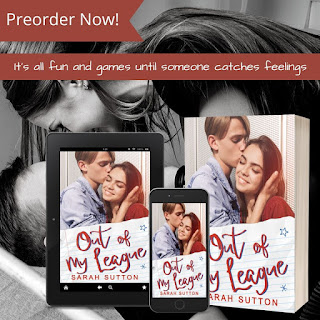 Purchase it at Amazon

I've been on a romance kick lately, I've been craving the sweet little warm and fuzzy feelings, and you know what? I got it with this book and more!

I dove into the story with no previous experience with Ms. Sutton's previous work but the synopsis sounded so darn cute that I had to pick it up! I could immediately relate to Sophia as a young adult, she's smart and driven but a little clueless on other things. I think the author does a great job of adding the complexities of being a teenager. She allowed Sophia to make mistakes BUT she allowed Sophia to learn from them to make her relationships strong. I LOVED THIS!

The author not only did this with Sophia but with Walsh! Sometimes I feel like the love interest or secondary characters don't get enough of a full story arc but I think it was done well with Walsh too! I enjoyed that Sophia and Walsh were able to relate to each other with their problems.

The writing was nice and straightforward and the pacing is excellent. There were a few things I noticed in the writing while I read that I think that could have been improved upon, but overall, I had no problem devouring this story.

If' I'm being super nit picky, there were a few things I had questions about or would have liked clarified but they were minor and probably didn't add any major relevance to the story.

I am extremely satisfied with the conclusion. I think it ended perfectly. Well done!

Pick this book up if you like feeling the warm and fuzzies or characters that grow learn from their mistakes to become better people. I highly recommend it!


For a Paperback of WHAT ARE FRIENDS FOR? (Sarah Sutton's debut book) and some SWAG (2 bookmarks as well as the image of her characters) enter the giveaway below!

EDIT: Giveaway has ended and the winner has been emailed! Thanks to everyone who entered!!!

Posted by Aisazia at 8:29 PM No comments:

Book Review: A Whisper in the Dark by Jessi Elliott 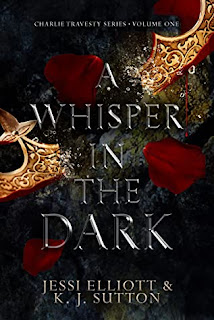 A Whisper in the Dark by Jessi Elliott and K.J. Sutton


A city ruled by vampires. A disgraced princess. A world underground.

Charlotte Travesty lives in a world of comfort. Glittering nightclubs, a lavish mansion, and a staff of humans at her beck and call. Being a royal vampire means her future is secured—all she has to do is get through the Awakening, an ancient ceremony every vampire experiences when they come of age.

But when her Awakening arrives at last, everything changes in one terrifying instant.

Cast from her home and rejected by the royal family, Charlie is forced into a life of fear and brutality. Where creatures called weepers live below the city, kept at bay by an unlucky sector of fighters enslaved by the very king who cast her out. Charlie now finds herself among the ranks.

She soon learns that weepers aren’t all she needs to fear in her new life. Other workers are dying in the tunnels below ground. Charlie knows that if she’s going to survive, she must form alliances with the very humans that despise her. But will she win their trust in time? Or will she die in the very darkness she was born to rule?

For fans of Sarah J. Maas’s Crescent City trilogy and Charlaine Harris’s Sookie Stackhouse series, A Whisper in the Dark is the first volume in the Charlie Travesty serial.

A fascinating idea and I like the way the authors spun their version of vampires. Charlie is a nice protagonist who is thrust into unfortunate circumstances and does her best to survive. I like the other characters involved too, especially Drew and Nina but I felt we didn't get enough time with them for me to figure them out quite yet.

I enjoyed the writing and the characters. The prose and characters are nicely written and I had no problems imagining each character with their own personalities.

Overall, I think there's potential in this story and it's promising some future intrigues but perhaps I'm not used to reading serials but I kind of expected more of a story and character arc in this first installment. It read more like the first third of a book to me, but again, that might be because I'm unfamiliar with the reading and pacing of serials. I had hoped there would be a huge revelation at the end than what we were given but I'm still interested in finding out what happens next.

Book Review: How to Quit Your Crush by Amy Fellner Dominy

How to Quit Your Crush by Amy Fellner Dominy
Publication Date: May 4, 2020
Publisher: Entangled Teen Crush

Mai Senn knows Anthony Adams is no good for her – no matter how hard she might crush on him. She’s valedictorian; he’s a surf bum. She’s got plans, he’s got his art. Complete opposites in every way. Vinegar and baking soda, they once joked. A chemical reaction that bubbled.

Yeah, they bubbled. Maybe still do.

Good thing Anthony’s got the perfect plan: two weeks to prove just how not good they are together. Whoever can come up with the worst date—something the other will seriously hate, proving how incompatible they truly are—wins.

Like taking a snake-phobe to the Reptile House at the zoo (his idea).

Or a cooking class where they don’t even get to eat the food (her idea).

It’s all about the competition, and it’s meant to help them finally crush their crushes. But it wasn’t supposed to be so hot. Or so fun. And when Mai’s future becomes at stake, will she be able to do the right thing and quit Anthony forever?